There are now hybrid taxis on the streets of Beijing! One type looks just like the regular taxis, and another is shaped more like a Subaru Outback. Before anyone gets too excited, though, they’ll be gone after the Olympics. Like a lot of stuff. “Beijing/China After the Olympics” will become a huge, huge topic over the next few weeks.

It was pretty spectacular. A bit too somber, though, I thought. We watched it on TV in our apartment, running to the windows every time fireworks went off. The fireworks were somewhat anticlimactic, though, because we’d watched the rehearsal from our window as well. I was hoping they were saving a bit more for the actual opening. Still spectacular, though.

Given the intense, intense anticipation domestically, the fact that not too many people have been complaining about the opening ceremony attests to just how spectacular it was.

Around our apartment, all businesses were forced to close at 2pm, and the street in front of our apartment was closed off to non-ticketed pedestrian traffic. 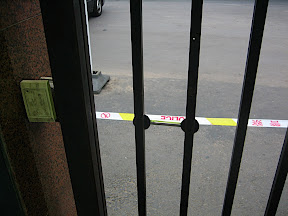 The Beijing Olympics Theme Song “You and Me”

Almost everyone I spoke to after the Opening Ceremony was very lukewarm towards the song.

Two days later, though, everybody is humming it. 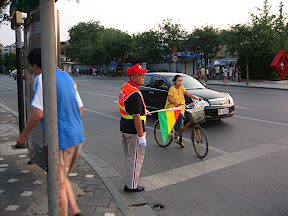 I fell asleep during the Opening Ceremony athlete’s parade, but I was hoping to determine which country’s flag this guy is using to direct pedestrian traffic. Maybe it’s not a national flag, but it sure looks like one. 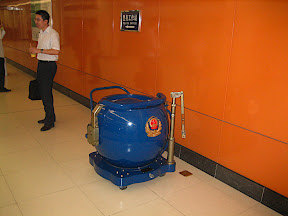 I have no idea what this is, but each subway station seem to have one. If I remember the name correcty, I think it’s a “Ball-shaped Anti-Explosion Device”, but I still don’t know what that is.

Thanks to Jake for linking to me. I’ll try to share any interesting things I see. I second his endorsement of James Fallows, whose most recent post is particularly great. For another perspective–this time from someone who is here just for the Olympics–check out Kevin Tresolini’s blog. He’s here covering the Olympics for Gannet and has been sharing his thoughts. The WSJ.Com China Journal is also a great source, and it tends to aggregate interesting things that other people have to say as well. Jake’s right that it’s very difficult to write about China, but it’s exciting that so many people are doing it now.

Also, Jake shares fascinating and exciting thoughts on topics including energy, social change, and a great project he’s working on at A More Perfect Market. At least three times a week.

There must be hundreds of Olympic countdown clocks spread out all over Beijing; they started appearing years ago and have been a marker of time passing here in Beijing. It seems like just the other day they were at several hundred days, and now they’re all at zero. I wonder how long they’ll leave them up.

There is hardly any place in Beijing (in any big city in China?) were you aren’t in sight of some sort of Olympic banner. 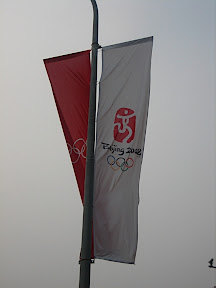 They hung these up outside of our apartment complex about a month before the Olympics started. At the time, I thought they should have waited, and that the white banners would turn black, but now I’m surprised at how white they’ve stayed. 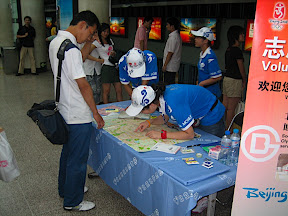 Volunteers are everywhere. And they are wonderful. There are about 20 different types of volunteers, from City Volunteers to Public Safety Volunteers to Fire Safety Volunteers. The picture above is from late July, well before the Olympics started, when there were already volunteers stationed in every subway station. They were very excited to help anyone find where they wanted to go, but they often couldn’t find the place on the map either.

When I went to the airport in late July, the volunteers looked very bored, and had no one to help. So I went up to them and acted confused while pretending to speak a random European language. They were very helpful, and showed me to my gate.

Apparently, it’s been hard to get tickets. Not really surprising. Suppose that there are 2 million tickets. That means that if 1 in 5 Beijingers decides that they want to go to one event, there are not nearly enough tickets. Having purchased some tickets in the first round of sales last year, we decided to go to a couple of events, sell some tickets to friends, and sell some online. Shortly after selling our Gymnastics tickets to a friend, we received lots and lots of inquiries from Gymnastics fans who were desperate for tickets. A lot of people had been swindled by sites like beijingticketing.com (google it), which apparently sold more than 40 million USD in tickets and delivered none. The guy sitting at the table next to us at dinner on Sunday night had a family member who lost 30,000USD.

Perhaps worse than losing the money, imagine bringing your two gymnastics-loving daughters to Beijing for the Olympics and discovering that you had no tickets.

I’m pretty sure that lots of people in China are going to get very depressed after the Olympics. The anticipation for the Olympics has been a little bit like the anticipation for Christmas for many children in western countries, except on a muchuch larger scale, fore a longer period of time, and with greater intensity. I think that Post-Olypmics Depression will become an officially recognized syndrome. Seriously.

That’s what’s written in lights on the side of an underpass on the North Fourth Ring Road. I think it sums up a lot about China before, during and after the Olympics. Too tired too try and express why I think that, though.