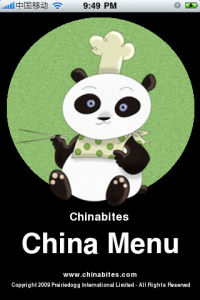 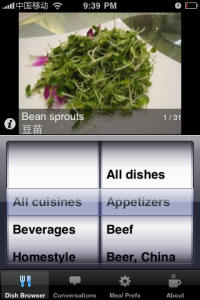 China Menu is at its heart an ordering tool to use at Chinese restaurants in China. It has hundreds of popular dishes ordered by cuisine and type, and large Chinese characters to show waiters and waitresses. 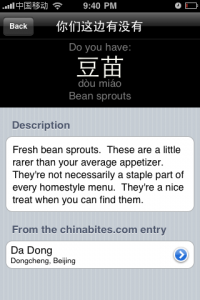 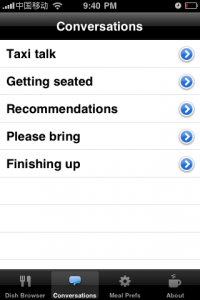 In addition to the dish browser, it also includes a simple interface to access simple phrases in Chinese related to all steps of the eating process (from “How do I get to…?” to “Check please!”). 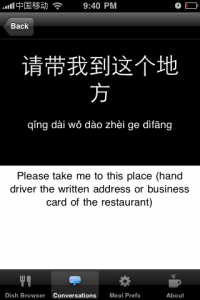 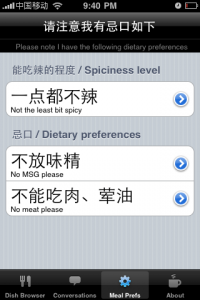 You can also set your own “Meal Prefs”–from how much spiciness you can take to whether or not you eat dairy–and then show the waiter/waitress a simple screen to communicate them.

My favorite part of the app is in the details. The more time you spend with the app the more you come to realize that it was created by someone who loves Chinese food and loves sharing knowledge about eating in China. See for instance, the note attached to “Chicken Feet”:

A genuinely popular Chinese appetizer. Those possessed of western culinary sensibilities might ask questions like: “What is there to eat on a chicken’s foot?” It’s a reasonable question that highlights a key difference between Western and chinese food culture. Generally speaking, in china, the process of eating is itself something to be particularly enjoyed. Examples of this include commonly serving meat on the bone, as opposed to in fillets or boneless chunks. The result is that the process of eating is slowed and the diner is forced to nibble and gnaw to get the pieces of meat off of the bone, enjoying the subtleties of flavor in the process.

Chicken feet follow in this tradition. There is no “meat” to speak of, just bone and cartilage. But they have often been marinated or otherwise prepared in seasoning that is savored as you nibble. As you explore Chinese food you will find other examples of how the process of cooking and eating is savored in a way that to the Western palette can often seem irritating, such as cooking the meal in a dry wok or hot pot right at the table as you eat it. Overcoming initial irritations or apprehension about eating something new and strange is all part of the fun of discovering food in China, and we recommend that you try it, if for no other reason than to say that you did!

Wow. Eating with China Menu is like eating with an experienced China (restaurant) hand! It’s also a great app to show people to demonstrate what an iPhone/iPod touch can do.

I would say more, but Wiley says it better on the China Menu site.

China Menu is $2.99 for the first week. I think the price rises after that, but I’m not sure to how much.

Update: Here’s an interview with Wiley about the app.